We spent our last couple weeks in the US apart. Nick and Iris went to Houston to visit family while I returned to Bishop to make one last bit of cash and to pack up our bags. The work was surprisingly fun. The PACU nurses in Bishop are all incredible people with interesting lives and quirky personalities. After barely working for 2 months, this week straight of nearly 40 hours was pretty exhausting.


I got in a bit of climbing, escaping the Bishop heat by driving up to higher altitudes. I spent a day at Hartley Springs trying to send everything before Keith- one of my favorite past times at which I don’t often succeed.  I managed to “flash” a problem called “I am a Beautiful Man” and then do the traverse into it in a couple goes which gave Keith the impetus to crush a reachy V8 right next to it.  I had to dig deep into my type-A competitive soul and follow Keith up the V8 by pulling off a tweaky mono. As I gingerly tugged I kept listening for a pulley pop which thankfully never manifested itself. Sometimes being ultra-competitive is a good thing, but sometimes I wish I was better at refraining from doing foolish things.

I spent another day at Rock Creek enjoying the reachy moderates with a new friend. I’d climbed with this gal before, but never just the two of us. I really enjoyed spending time with her, and felt a bit sad that I was just getting to know her mere days before I moved away. Fortunately, she enjoys Spanish limestone as much as we do and will no doubt come for a visit.

I also managed to go on one last fabulous Sierra hike up to Lamarck lakes with my mom. The Sierra had finally gotten some snow during the month of May while we were in NC so the views were spectacular. I always enjoy hiking with my mom because she goes at a pace I like, and we have great conversations.

I missed my family immensely during these two weeks, but between work, play, and packing I managed to stay busy. We’d already whittled down our belongings to 12 medium sized boxes, but I had the arduous task of reducing it all into 4 large suitcases and 2 small ones that each weighed less than 50 lbs. This task involved lots of rearranging and shuffling and weighing of heavy bags. In the end, I didn’t have to get rid of much. My suitcase was loosely packed when I received an incredible package from Scarpa: a year’s worth of climbing and running shoes! Somehow, I managed to stuff way too many shoes into my suitcase by filling each shoe with small articles of clothing.

I also spent way too many nights enjoying Bishop’s new brewery: the Mountain Rambler. I had planned to keep my body on East Coast time to make the jet lag to Spain less severe, but I couldn’t resist the lure of dear friends and pitchers that the Brewery provided. At the end of my 2 weeks in Bishop the owner of the brewery, Joe, and I were on a first name basis. I highly recommend the bratwurst with beet sauerkraut and the coffee porter.

For the drive to the airport in LA I had planned to rent a mini-van to haul all our luggage (6 suitcases, 3 bikes, and 2 crashpads). When I got to Enterprise I started in on my usual spiel fishing for a better deal or discount. Surprisingly, the agent told me they did have a special…on pick-up trucks. The sky was bright blue with no rain in the forecast so I went for it and asked for the smallest of the three. It was the biggest vehicle I’ve ever driven, but well worth the $100 I “saved.”

My mom came with me to LA to spend a couple days with Iris and to drive the monster truck back to Bishop. We met Nick and Iris at an airport hotel fresh off their return flight from Houston. We enjoyed dinner at a BCD Tofu House which is pretty much the only thing I look forward to about LA. We went to Segundo beach one day and played for about 20 minutes in the surf before we realized our feet were covered in tar balls. The next day we saw on the news that they weren’t able to figure out where the tar balls were coming from, but had started a clean-up at Segundo Beach. It was so disgusting yet somehow seemed appropriate for LA. After sending my mom off in the truck we were stuck at the hotel without transportation and decided to spend our last American dollars on our last day in America at the hotel Denny’s. Apt, no?


We miraculously made it through airport check-in on Saturday morning without a hitch. They even offered to check our carry-on luggage for free, which left us with only 3 small bags as we navigated through 2 more airports. The flight to Montreal was a long 5 ½ hours and ended up running a few minutes late. We had 35 minutes until our next flight, and cut it frightfully close with a long wait to pass through customs and a mad sprint from one end of the terminal to the other. Our gates couldn’t have been farther apart and we wouldn’t have made it if Nick hadn’t put Iris on his shoulders as we ran. We were in sight of our gate when we heard the final boarding call. Strangely, they hadn’t given us seats together and despite my telling the stewardess that I didn’t mind not sitting with my four year old on the 7 hour red-eye flight she insisted in rearranging half the plane to seat us all together. We got 3 or 4 hours sleep before landing in Geneva and had a short wait before boarding our puddle jumper to Valencia.

I spent most of the short layover convincing myself that there was no way our luggage could have made it between the two planes during our mad dash in Montreal. Nick kept telling me to stop fretting over our luggage and sure enough, as we disembarked onto the tarmac in Valencia we looked over to see them unloading all our luggage, even the bikes and the car seat!  Hurray for Air Canada and Austrian Airlines! I’m ashamed to admit that our pile of luggage was at least half the luggage on the entire plane!  We slowly made our way to the rental car agency where we picked up our giant (by European standards) VW Caddy.  Iris and I passed out immediately while Nick drove the 2 hours from Valencia to Albarracin. Lest anyone get upset at my lack of concern for Nicholas’ driving prowess after 20+ hours of traveling, know we had already discussed this part of the trip and decided that in exchange for my holding Iris in my arms during the red-eye flight Nick got to sleep “undisturbed” (as much as is possible on an airplane) and I would get to pass out on the drive.  And yes, I stayed awake long enough to help him navigate through the city roundabouts and onto the highway.

As we approached Albarracin I stared at the flat expanse of wheat fields and blue sky and wondered if we’d made a mistake. I could have gotten this same view in Kansas or eastern Colorado. Soon, however, the road started to twist and drop and climb into the Sierra de Albarracin. Limestone cliffs appeared in front of us, and then, a castle wall. We rounded the final bend in the road to see the breathtaking town in all its evening glory. Medieval houses towered on the hillside above us and a trout-filled river paralleled the road just below us. We passed fields of bright orange poppies shaking their petals at us in the breeze. In about 2 minutes we had passed the village and were parked in the parking lot at the far side of town. 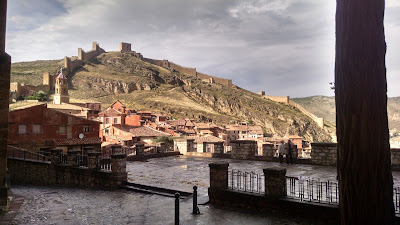 As we walked into the pedestrian only village I pulled up the mental map I’d retained from spending way too much time in LA “walking” these paths on Google Maps Streetview. In a couple minutes we stood before our door on Calle Santiago. Despite numerous email exchanges with our landlady we had yet to actually speak with her. I tentatively knocked on the door and hoped that she really existed and that our deposit money was really reserving this beautiful casa. The door opened and there was Isabel, in the flesh! We staggered around the 3 story sprawling house trying our best to understand Isabel’s fast lisped Castillian and to ask the most important questions. How does the stove work? Gas, use a lighter.  How do we pay the electric bill? It’s in Isabel’s name. We can send her a check. Where is the bakery? Look out the door. Its 2 doors away! She put on a pot of coffee and left us in our new home. We marveled at the views from various windows. After some brief confusion in which Iris thought she was getting the room that was obviously suited for us (a double bed instead of 2 twins) and the subsequent tantrum, we all settled into bed and slept fitfully for at least 12 hours.

I awoke the next day to the sounds of swallows and dozens of Spanish voices. I opened the living room’s double doors onto our tiny 2nd story balcony and looked down at what could only be described as a tour group staring up at the house next to ours! A classic example of Albarracin architecture, no doubt. After a week of living here I’ve grown accustomed to the sounds of the 11:00 tour that passes by our house. Fortunately, Spaniards begin their days quite late by American standards so these tours are in no danger of waking us up now that we’ve recovered from our jet lag.

We’ve spent the last week exploring our tiny village, befriending the local kids, hiking the castle walls, conquering the nearby sandstone boulders, and mastering the schedules of the local market.  We’ve probably been drinking too much wine and eating too much bread, but we’ve got 51 more weeks to cultivate healthier habits. Just this morning (a Saturday) we “discovered” a sport crag when Nick looked out our living room window and saw 2 climbers ascending the limestone wall on the far side of town.  Iris has already learned a dozen Spanish words and enjoys using her favorite phrase “quieres jugar” (Do you want to play) on the children of locals and tourists alike. I’ve realized our village isn’t as isolated as we had feared and the closest decent sized town (Teruel) is only 35 minutes away. Our bigger city is Valencia and is only 2 hours away nestled against the Mediterranean.  The food is cheap, the people are friendly, the weather is ideal, and for our little gringo family, life is sweet.